Visits near Chalon-sur-Saône in Burgundy

To be discovered in Mervans :

Barony and castle-old, the village of Mervans, "Villa Mervans" in Middle Ages, the Germanic "Merovech '(literally' Sea Battle ', certainly the name of a Burgundian chief), was one of the main towns of Bresse Bourguignonne in feudal times.

The manor, held of the Duke of Burgundy, was particularly owned by the powerful Counts of Vienne (1266-1450). The names indicate that the town was fortified, "The Valles", "The Villebasse" (Latin vallum: moat), "The Great Ferté" (firmitas: well fortified place). A castle, which was located south of the present church, was destroyed in the seventeenth century during the wars of County.

A hospital setting is mentioned from 1259. It was a leper colony, established outside the walls of the village with a cemetery and clean the place called "The Martret" (maryretum: cemetery). House of wood (XV century) in the heart of Vieux Bourg, is a listed building. 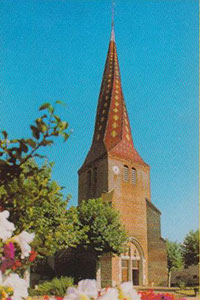 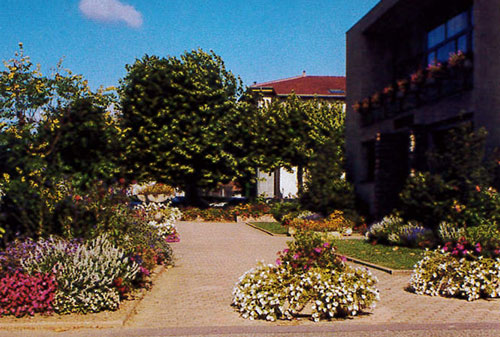 Mervans is mentioned as a parish in 1310. The cure, collation of the bishop of Chalon, had a considerable familiarity conferred on its holder the title of archpriest of Bresse to the end of the eighteenth century. The church, under the patronage of St. Maurice, was built during the fourteenth century on the site of an old Romanesque chapel. The famous spiral spire of the tower, 33 meters high, can be traced to the period of Anglo-Norman Gothic (fourteenth and fifteenth centuries). For an unknown cause, perhaps a settlement, the eight hips inflect from left to right as and when they rise and take an irregular curvature, giving the whole a surprising sense of imbalance. One can admire the interior of the church the headstones of fourteenth and fifteenth centuries.

Contained in the eighteenth century among the lords of the most active region Louhannaise, Mervans has expanded economic role under the Third Republic (up to 17 annual fairs in 1936), in particular through the opening of the railway line iron from Dijon to St Amour and construction of the station, then the line of local Chalon-Mervans (the "jalopy"). It was then that the village took its present appearance.

With a craft area, services and shops, sports facilities and quality tourism, offering many cultural events, Mervans is probably one of the most dynamic and attractive in the region.

The concern of those responsible for the Living Museum was indeed to offer visitors to the site of Pierre de Bresse an overview of identity Bresse. But it soon became clear that part of the castle was not enough to mention this.

To ensure an effective presence on its territory, the Living Museum of the Bresse Bourguignonne decided to build over the meetings a network of correspondents and sources : the "antennas" Ecomuseum museums or associates. Moreover, it is to each of these antennas that relate the different sequences of the permanent exhibition of Pierre-de-Bresse.

Establishing itself on a site or a historical building, the antenna is intended to account for these, to trace the thread of an activity, to denote the specific know-how. Each of them shows a specific theme of identity Bresse.

Special rates are available at the reception at Hotel Restaurant Catering Le Marvans located in Mervans between Chalon-sur-Saone and Louhans Saône-et-Loire. 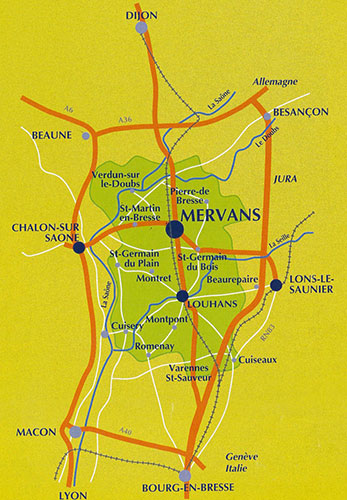 From Mervans, discover the landscapes and wealth of the region by browsing through the trails of the sector, through the villages of Serley, Saint-Germain wood ... For more information, visit the website http://www.bourgogne.cybercommunes.com